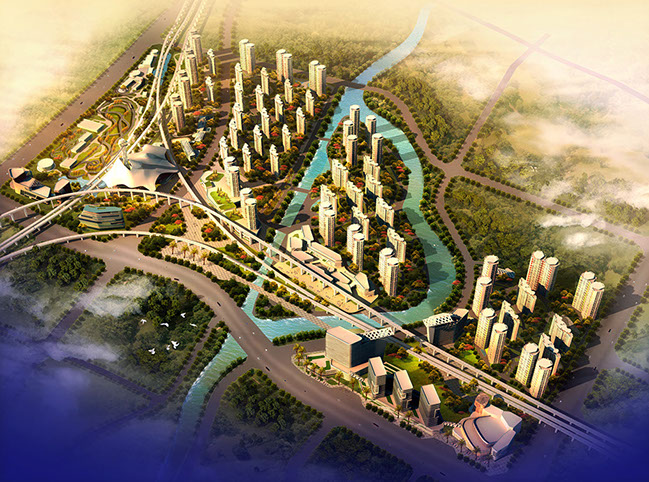 After the devastating 2008, 8.0 earthquake in Szechuan Province that killed more than 80,000 people and left 4.8 million homeless, the first priority for the City of Dujiangyan was to create temporary housing for tens of thousands of families. The next priority was to build a new urban core that would enhance the lifestyle of the residents in the community.

The name ‘Phoenix’ was derived from the mythological bird and is in recognition of the city’s rebirth. The urban district is planned at the crossroads of the newly constructed high speed rail and urban light rail, becoming the new arrival gateway for the city. In looking to the future, Phoenix Gateway City will also serve as a tourism anchor for the famous 2000 year old Dujiangyan irrigation system, which remained intact in spite of the earthquake’s impact.

The site contains an array of concrete flyovers that support the rail system. The flyovers’ easements and building setbacks were optimized by creating a pedestrian-friendly public park system that weaves a mix of business, commercial, cultural, entertainment, recreational and residential components throughout the 1,650-acre master plan. The architectural design and massing of the built environment was developed with special attention to solar angles and the overall skyline. The building designs are strongly influenced by the crossing patterns of woven bamboo and the smooth river stones of the historic 2000 year old dam.

SITE DESIGNED AND CREATED BY HHCP

SITE DESIGNED AND CREATED BY HHCP